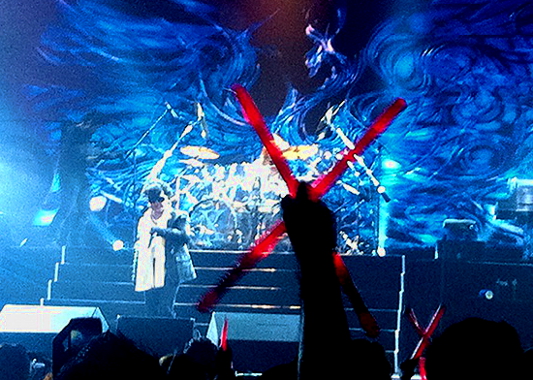 The process of writing my book is a somewhat tedious one.
I’m not writing the book in  a straight chronological order,
but it’s starts with Japan, and a lot in my life the past decade,
has do with Japan and Japanese music,
Naturally then, most of the content is from my years in Japan…
not all, but most of it.
In order to aid my memory I’m going through thousands and thousands of photos and video clips.
I’m creating a time line with a great program called Scapple. I highly recommend Scapple for any kind of mind-mapping, or system charting.
Beside the time-line, I am also using Scapple to create a huge sociogram,
in order to graphically visualize how people I know, and have been in contact with,
are related to one another.
It’s been a big eye-opener for me to be able to see how many people are connected to one another!!

The book, which is a memoir, will tell what I did before setting foot in Japan,
and why at all I decided to go to Japan of all places in the world.
X Japan and hide with Spread Beaver, is central to this.
It was through listening to Japanese music, that I decided I wanted to go.
I have never been any kind of Japanophile, but my whole life I’ve been very fascinated by Asian history and philosophy, particularly Chinese.
While studying at UNM, my friends Yumi and Rio Watanabe (re-)introduced me to the band X Japan.
X Japan and hide, then in turn lead me to a fascination with Japan, its people, its culture and of course, the Japanese music.
In the beginning particularly with Japanese Visual Kei
and Japanese Rock.
X Japan was my gateway to Japan.

So with the thousands of photos from the many live gigs, parties, travels, dinners,
back stage areas, family events, weddings, funerals,  bars, business meetings, hospital visits, lunches…..
I’m able to revisit my own life for the past 6-7 years,
and little by little I’m putting it all together,
The time line helps me to get more of a ‘bird’s view’,
to see the bigger picture, and then from it, be able to create the more detailed content.
X Japan, and the Japanese music,
have connected me with so many people around the globe,
not just in Japan.
For example, in the fall of 2012 I visited a friend in Kiev, Ukraine,
who also admires hide, and the Japanese music and culture.
Facebook and twitter have connected me with people all over the world,
and given me many amazing adventures and experiences.

However, Facebook and twitter are also a great sources of misconceptions
of how the world is, and how people actually feel.
By examining my own recent history, I hope to be able to examine this further,
and investigate how to best deal with emotions arising from having
a presence, and participating, on social media ‘places’.
What amazes me are also all the different social ‘rules’ regarding:
what to write, when to write, and how to express oneself on Facebook.
There are big differences between different cultures, countries and regions in the world.
The effect when we all interpret what other people post,
is one giant mess at times, and there is no explanation,
no manual, no help to interpret it all.
Often we aren’t even aware, that we might have completely different intentions with our posts online.
All this fascinates me!
But
Most in the book will not be about how we differ around the globe,
rather most of it will be about shared appreciation.
For example the love for hide and X Japan that reaches far outside Japan,
and yet not necessarily into mainstream global media.
I will therefor also dedicate a big chunk of the content to telling the readers
about lesser known artists and bands in Japan.
Which in a way has been my mission ever since that day
at Miura Reien in May 2011;
The visit to hide’s grave.
My meetings with the Japanese musicians,
and other Japanese people.
My interactions and experiences of different kinds of relationships in Japan.
How I felt. How I feel. How I’m interpreting all these encounters.

Oh and yes, the X Japan concert in Bangkok November 8 was amazing!!
It was their final performance  of the South East Asia tour
which in turn was a part of a bigger world tour 2011.
The Thai X Japan fans went to great lengths to help me.
Not only did they house me, the also got me an amazing ticket very close to the stage
dead-center of the arena.
#WeAreX! One last photo of DIE-さん…
Hope to see you again soon!

As it looks like now, next time I will see DIE-さん Live is at CLub Sensation in June for this event
http://sensation-jp.com/schedule/4821/
I really really wish I could go see Ra:IN too but unfortunately I have a schedule clash…
June 9th is MUCC’s 15th anniversary… which is the same date as Ra:IN performs here in Tokyo.
If anyone feels like funding my travel to Nagoya or so..so I can see Ra:IN anyway…
I wil gladly accept it 😛
Oh and here is a link to nicovideo
http://ch.nicovideo.jp/channel/hide

Summing it all up…. In the end a surprise guest vocalist entered the stage. I will return to this blog and edit as soon as I have found out his name. If you know who he is, please let me know so I can rectify my shortcoming here!
The real surprise though for us the audience, was that after the encore NicoNico recorded a PV for a hide event that is coming up now in May
We all joined in singing ROCKET DIVE動画シューティング
It took some practice which   generated tons of laughs from everyone and it was just an incredibly FUN time to be there…
Language issues did cause a few problems for me, and even if I do know the song, I was soo lost when it became our turn to sing  LOL

Me and Phoe-Lo  and quite a long train ride back and it didn’t help that the last train with Chuo Line from Hachioji was delayed (train delays are rare in Japan but with this exception… Saturday night last trains…)!
We made it home alright and could conclude that once again we had been to yet another incredible Live performance… Every time I feel that it cannot get better than the last one I went to and yet everytime I feel this must have been the BEST LIVE ever!
KISS the World and LOVE Life!!
Hope you all can feel the vibes  *:･ﾟ＼(ﾟ▽ﾟ*) /ﾟ･:* Close up from KISS THE WORLD  April 21, 2012 at 八王子X.Y.Z.→A
DIE is a laughing, smiling, fun incredibly good keyboardist.
Besides Solo work on Piano/Key board he is currently involved in Ra:IN and as here in Kiss the World
You can read more about him on his site
http://www.die1964.com/info/
His incredible biography is too long for me to cite here but you can read it here:
http://www.die1964.com/profile.html
and more about Kiss the World here:
http://ameblo.jp/ktw2011
DIE laughs on stage, climbs like monkey and is just incredibly wired and fun on stage!
A list of the very best Japanese musicians and entertainers must include DIE-さん
I’m very grateful  to hide, the Pink Spider , thru whom I got to know about Spread Beaver (DIE played Keyboard)
LOVE LIFE! and KISS the WORLD!